Skip to content
Later, Frown Lines….
Xeomin is an incobotulinumtoxinA product and is a competitor to Botox Cosmetic and Dysport.
Xeomin is more similar ingredient wise than Dysport however they all have specific differences that make them different.
The end result of having lines become smoother and movement of certain muscles become more limited is the goal.
Xeomin is often a new name to patients but has been on the market since 2012/2013(it was available in limited offices in 2012).
Although the name is less recognized it is a great option for many patients. Due to having less additives there is a decreased chance of developing a resistance to the protein.
Also less additives is what has led to it being called “a more natural or a more pure” alternative to Botox or Dysport.
The important detail I tell my patients is we have to work together to determine YOUR optimal dose.
There can be slight differences in the amount you require of all options and thus we work together for your best results.
I have many patients who prefer Xeomin over Botox and over Dysport.
Many patients appreciate that Xeomin has less additives.
I have some patients who feel most comfortable with Botox because it has worked well for them in the past and do not wish to change.
All of these answers are perfect as no two humans are exactly alike!
The time frame of longevity study wise is a duration of 3-4 months whether you choose Xeomin, Dysport or Botox.
There is some data just released that Botox at higher doses may have longer duration but it is not clear if the rates of unwanted side effects are higher with increased doses.
I do have patients that say they get correction up to 5-6 months with “regular” doses but this is unusual and I tell those patients they are the lucky few.
Last year I had a longtime patient come with the same beauty wishes but was on a tighter beauty budget, we had discussed Xeomin in the past but she was nervous to “try something new”.
She was longtime patient so I knew she trusted me and took the opportunity to share through her that there is no visible  difference between Botox and Xeomin.
So I injected Botox to one side of her frown lines and injected Xeomin to the other side and she did not know which side I injected with Botox.
This was my point and is now coming in regularly for Xeomin treatments every 3-4 months.
Is Xeomin right for you? We have an exciting special going on and we can decide clinically what is best for you with a complimentary consult. 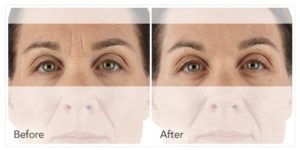 Get all latest content delivered to your email! Coming Soon!